It is not possible to repair a torn ACL by stitching it back together. However, it can be reconstructed by using grafts to replicate the function of the damaged ligament.

The (ACL) is the commonest ligament in the knee that needs to be reconstructed.  There are two ways to reconstruct this ligament; one is to use the hamstring tendons (semitendinosus and gracilis tendons); the other is to use the central third of the patellar (kneecap) tendon.  For the majority of cases, Mr. Gohil uses hamstring grafts since the cuts required to perform this surgery are significantly smaller than using the central third of the patella tendon.  A small cut of 3-4cms cut is made over the upper leg to remove the hamstring grafts. (Fig. 1)

The majority of ACL reconstruction surgery is performed using arthroscopy so that the knee joint does not have to be opened.  This speeds recovery and significantly reduces the amount of post-operative pain.
The procedure involves removing the ruptured ligament and placing the hamstring graft in the correct position to allow it to reproduce anterior cruciate ligament function. (Fig. 2)

Following anterior cruciate ligament reconstruction, some patients do go home on the same day of surgery.  If your surgery is in the afternoon, you usually stay in overnight in the hospital.  Physiotherapy is needed for the first 6 months after the procedure, initially to allow a full range of movement of the joint to be regained, then to start building muscle power and finally to retrain the knee in sensing its joint position (proprioception).  Sporting activities should be avoided for 9-12 months after this procedure

Fig. 1
Photo of a Right knee.  The incisions I use for ACL reconstruction are shown in red.
The smaller incisions are arthroscopic portals and the larger incision is used to harvest your hamstring tendons. 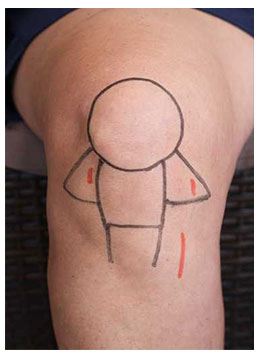 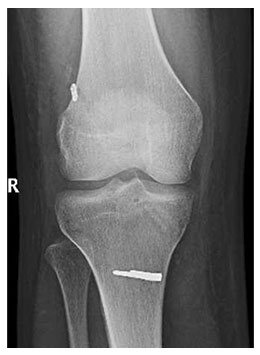 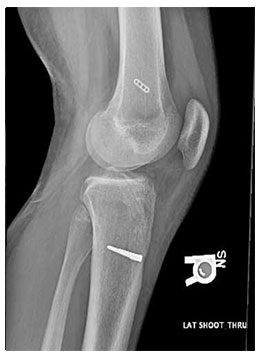 FAQ
Our most Frequently Asked Questions.

Q: How long will I be in hospital after this procedure?
A: Most people stay in hospital overnight, but if you are comfortable and walking well with good pain relief, the procedure can be done as Day Case Surgery.

Q: Will I need to wear a knee brace?
A: Most people have some weakness in the quadriceps (thigh) muscle after this operation, so you will be asked to use crutches for about 10-14 days.  Mr. Gohil does not use a brace routinely unless you have had a meniscal repair.  You would then need to wear a brace with a hinge for 6 weeks after surgery and are usually allowed 0-90-degree range of movement, to protect the meniscal repair.

Q: When will I been seen by a physiotherapist?
A: A physiotherapist will see you whilst you are in hospital and when you are discharged.  After discharge, arrangements will be made for you to have physiotherapy at a place convenient to you.  You will need physiotherapy twice a week for the first 6 weeks after this procedure, and then less frequently for 6 months after surgery to completely rehabilitate the knee.

Q: When can I shower?
A: You can shower straight away after this operation.  You will need to wear waterproof dressings that you will be given in the hospital.  If they wash off in the shower, they can easily be reapplied.

Q: When will the stitches (sutures) be removed?
A: The sutures are dissolving so do not need to be removed, but the wounds will need to be checked 2 weeks after your surgery.

Q: How much time will I need to take off work?
A: Most people need 14 days off work if they are office-based; however, if you are involved in physical work, you will need at least 6 to 12 weeks off work.

Q: When can I drive?
A: You can drive again 3-4 weeks after this procedure.

Q: What are the possible complications of this procedure?
A:  Possible complications that may occur, but are very low with this procedure, include:
1.      Blood clots developing in the legs (deep vein thrombosis) that can travel up to the lungs (pulmonary embolism).  Precautions are taken to try and prevent this whilst you are in hospital and after your discharge.
2.      Infection; the chances of this are low and precautions are taken reduce this risk.

Q: How much swelling can I expect after this surgery?
A: There will be a moderate amount of swelling after the operation for the first 2-3 weeks, particularly above the kneecap.

You have been booked for an ACL Reconstruction and Mr. Gohil has given both verbal and written information.  Please read these and if you have any questions contact us.

This usually requires an overnight stay so you will be admitted on the day of surgery, and be going home the following morning after surgery.

You have been given forms for investigation.  These need to be completed at least 2 days before your surgery.  If you are having X-rays, please bring these and any relevant CT’s and MRI’s with you on the day of surgery.  The results of your blood tests and ECG (if requested) will be sent to us.

-          Please arrange for someone to pick you up from the hospital and you may need some help at home for a couple of days.

Usually you will be admitted to the ward after the surgery.  A physiotherapist will review you on the ward and arrange for outpatient physio.

There will be a pressure dressing on the knee and this needs to remain on for 72 hours.    The waterproof dressings can then be changed to a clean waterproof dressing, then changed every third day if required.  The incisions should be covered for 2 weeks until seen in the clinic.

What to expect following the procedure

Swelling is common but will resolve.  If there is increased swelling or calf pain +/- you have a temperature please see your doctor.

You may get some pain as you mobilise more and you will be given pain relief on discharge, and you may need to get a further prescription.

Bleeding-there may be a little blood on the dressing, rest the leg and keep it elevated.  You will be given a dressing to change after 72 hours.  If there is any discharge from the wound, please contact us or see your doctor.

You will be contacted with a follow up appointment to review your progress, and at this appointment Mr. Gohil will advise you about driving and returning to work.

Please get in touch with us by completing the form here or alternatively you can contact us by fax or phone at the numbers below. We will endeavour to get back to you as soon as possible.